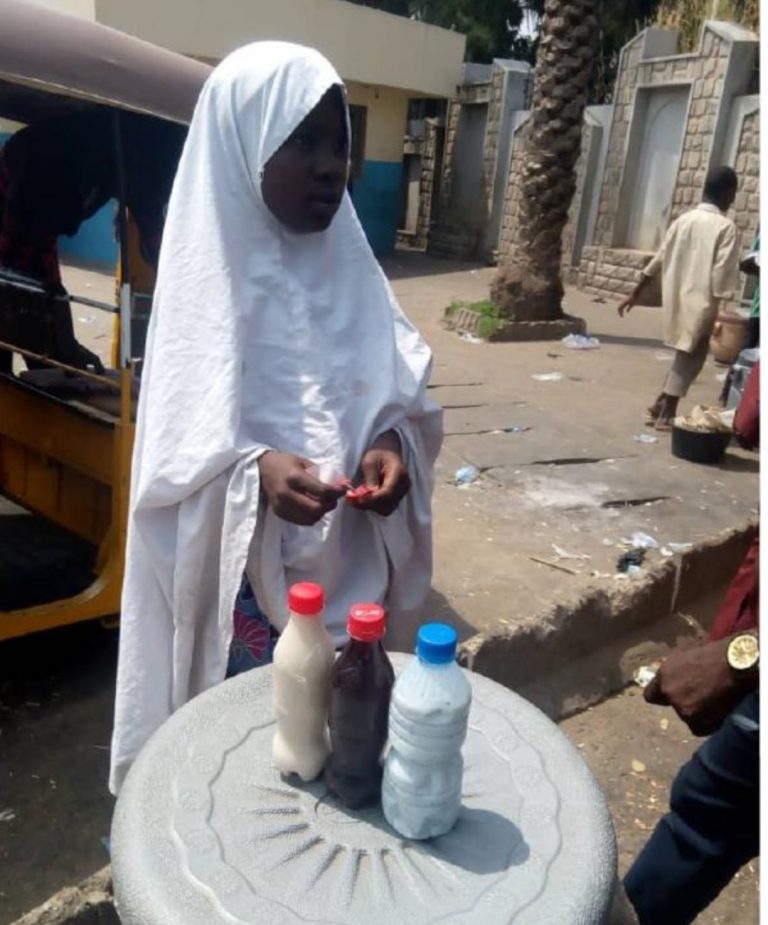 How poverty, social norms keep children out of school in Northern Nigeria

12 year old Amina Abdullahi lives in Angwan Jabba, Kano state. Every morning, Amina goes to the junction to sell ‘zobo’ and ‘Kunu’, a local soft drink at the junction. She has been doing this business for two years since she dropped out of school.

She said her father asked her to drop out of school because the school fees is expensive and he does not have money to sponsor her with her two brothers at the same time.

brothers in school. It is not easy for me to see some of my friends go to school every day while I hawk at the junction. But the decision has been made and there is nothing I can do about it”.

Amina’s story is not strange to many people in this part of the country, where poverty has locked children out of school and denied them the opportunity of meeting up with their contemporaries in other parts of the country.

It is also no news that government at all levels care less about the needs of the people. If anything, they only pay lip service to those issues with little or no action to address them.

Presently in Nigeria the Universal Basic Education Council (UBEC), said 13. 2 million children in the country are out of school. This is despite the efforts of the

United Nations Children Funds (UNICEF) to ensure that “All children access and complete quality education, within a safe learning environment, with skills and knowledge for lifelong learning.

Recently in Kano, UNICEF organized a media dialogue in Kano for journalists to ensure equity and parity between boys and girls. This is because in that part of the country, the streets are beclouded by children of school age whose parents cannot afford their education owing to poverty, while some parents believe that paying for a girl child education is a waste of money.

Speaking on the issue, a Communication expert who is familiar with the activities of children in the north, HajiyaMaryam Garba Hassan, said poverty is a major factor that contribute to the problem of out of school children in northern Nigeria.

“Today, there is the problem of parents having large number of children, more than they can take care of, and still having them despite the various methods of birth control available. Because of this problem, you will find out that parents are only struggling to feed. With this, the children are made to share the responsibility of feeding the family through hawking and doing other menial jobs to survive and that automatically keeps them out of the four walls of a school.

“Presently in the north, there are more girl child that are out of school than the boys. This is because; the girl child is seen as a member of the family that has limited time to live under the same roof with her parents before she gets married. Therefore, her education and bright future is sacrificed for the benefit of the family while the boy child is send to school. Most often than not, the boy child is educated with the money made the girl child.

“Secondly, tradition and to some extent religious believes on the parts of some extremists or illiterates parents play a major role.

Some northern parents still believe that western education is not good for the girl child for fear of exposure.

Speaking further, she said societal negative perception of educating the girl child is a major factor.

“I have experienced that while growing and when my siblings and I gained admission into the University. At that time most, if not all of our pear group were married off. That raised a lot of side’s talks, especially from our neighbourhood.

Sometimes even when parents have the means to support their girl child the attitude or wrong perception of communities on western education make them have a change of mind.

Issues like suitors running away from them for fear of marrying women who are more educated than them often make parents sacrifice the future of their girl child”.

“Until we break that culture and resolve social contradictions that some people are born to serve others we cannot solve the problem of education. In the north, there are people who are born to fan emirs, trumpet blowers, etc. Until we set aside these issues created by certain elites to keep hold of the society, we won’t go anywhere.”

He added that weak laws and poor institutions of government to address the issue has helped in widening the gap. “If we have strong policies, and ascribe punishment for parents who fail to train their children things will work better. Let anyone who wants to marry promise to sponsor children’s education. If we don’t address this, time will come that the country will be insecure. A poor person is hopeless and no value for life. We must create value of what we want our children to be and ensure they have it .

Nigeria is no doubt one of the most blessed nations in the world when it comes to natural resources. “However, the number of her out of school children especially in the northern region is really alarming. According to UNICEF, Nigeria’s population growth has put pressure on the country’s resources, public services and infrastructure. With children under the age of 15 accounting for 45% of the 171 million populations, the burden on education has become overwhelming. Nigeria is currently having over 13. 5million out-of-school children. Sixty percent (60%) of these children are in northern Nigeria.

“The Minister of Education, Mallam Adamu Adamu, in January this year claimed that the number of out-of-school kids in Nigeria dropped from 10.5 million to 8.6 million in the last three years. But is that really true? Even if it is so, it is still really not encouraging at all, especially in the north. Another big problem we are facing is that a lot of northern parents do not allow their children to be enrolled in western education classes. They prefer their children to attend ‘karatu’ Islamic system of learning. This is because, majority in the far north still believe that western education is sinful, and thus will never allow their children to attend.”

“We need to face the fact that the Nigerian education system has undoubtedly failed millions of children. In north-eastern Nigeria, conflict has deprived many children of access to education. Teachers have been killed, and schools burned down or closed for security reasons. It’s evident that the government cannot fix the educational sector alone, international and private intervention is urgently needed. We must all join hands to campaign for our children to return to school, and Nigeria will be great again”.