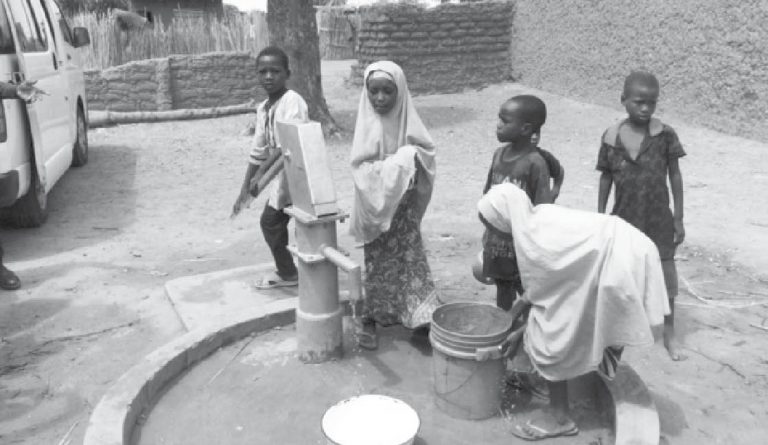 The people of Yammawar Kafawa community in Damnatta Local Government Area of Kano state, have found a way of phasing out the old tradition of open defecation.

The community is currently wearing a new look, enjoying a newly drilled borehole for the community and improved toilet for every household. These new additions were the latest cause for smiles and friendly banters in the community, as they bade farewell to diseases caused by open defecation and unsafe drinking water.

The new look was courtesy of the Sanitation, Hygiene and Water in Nigeria (SHAWN 11) project, championed be the United Nations Children’s Fund (UNICEF),

Located about 10 kilometers from the local government head quarters, residents of the community said the government has abandoned them for long.

Recently when UNICEF took journalists to the community, a newly drilled borehole stationed in the Centre of the community, was the Centre of attraction; especially seeing children who were enjoying pumping the water. This development seems to be the major answer to their long time problems of diseases caused by open defecation and unsafe drinking water.

Speaking to our Correspondent, a resident of the community, Muhammadu Sani said the project has wiped away the tears of people in the community.

“We are happy that the borehole and the toilets will go a long way in addressing the health challenges we have suffered in the past. Our children will no longer die from diseases because this Project has improved healthy living and we are happy to count ourselves among the people who are enjoying safe drinking water and using improved toilet system.

“Before the borehole was drilled, our only source of water was the well. We have only 15 well in the community and it was difficult for children to fetch water due to the risk involved in fetching the water and the diseases the water caused us and our children. But now, with this borehole, we can proudly say good bye to disease and my little children can go to the borehole and pump the water any time we need.

On the kind of diseases they faced before now, Sani said “prior to this project, we had diseases like; Cholera, Guinea worm disease, Typhoid and dysentery. I can categorically tell you that over 40 children died from diarrhea alone. But since this development, our health situation has improved.

“Before now, we had only 10 toilets in the community, but now we have over 60 toilets. I am proud to say every house is now enjoying improved toilet with some having more than one.

“People in this community no longer defecate outside. Anyone who does that will pay a fine. This law is in place to help all of us to live well without any disease. We know what we have suffered in the past, we won’t go back to that era again.”

Speaking on how the water and the improved toilet system will solve the community’s problem, the 70 year old village head of the community, Salleh Haruna, said they have learnt various method of how to ensure proper hygiene.

“We were taught to wash our hands at all times, especially after defecation. Every toilet has water attached to it for any one who uses the toilet to wash his/her hands. We have also taught our children and they are doing it well. We don’t have any problem with the availability of water in our community.

“Also, this project has united us more than before. We now contribute money that will be kept in the community purse so as to solve any problem that might come up. The major area we agree to channel the money is for the maintenance of our borehole and toilet. But we later agree to continue with the contribution so as to solve other community problems.”

On her part, Rabi Dahiru said women are children are the ones enjoying more than the elderly.

“We no longer go far in to the bush to defecate. Everything is now very easy for us, and we are very happy. I don’t know how to say thank you because it won’t be enough. Many women in the past had issues with their husbands because the well does not always bring out water. When that happened, we were always rushing to get water, and when you get their late, you won’t get water and that was the major causes for divorce.

“We are happy now because we have enough water and toilets within our houses. I am happy that most of our problems are solved and we are more happier now”.

The LGA’s are; Birnin Kudu and Buji, in Jigawa state; Logo in Benue State and Obanliku, Yakurr, Boki, Yala, Bekwarra and Ikom in Cross River state.

Speaking during a media workshop organized for journalists, broadcasters in Kano recently by the Child Rights Information Bureau (CRIB) of the Federal Ministry of Information & Culture in collaboration with UNICEF, the agency’s WASH Specialist, Bioye Ogunjobi, said the best way to achieve ODF was for everyone to build toilet in his/her house.

“We are calling on Nigerians to ensure that every house has a toilet. People should stop building houses without toilets, they should take it as a priority to ensure the safety of their families and the cleanliness of their environments.

“When people build toilets in their houses, there will be rapid reduction of diseases in those places and no smell in those areas. It also means that the people have improved on their dignity as human beings and will be most healthier than areas without toilets.”

Speaking on the current project of the agency in the state, Ogunjobi said, “We are working in 6 LGA’s in Kano state. We believe that the successes in those 6 LGA’s will motivate others to do more. We are encouraging the government to take the lead and ensure the safety of its people. But if nothing is done to change the current situation on ground, there will be disease outbreak in those areas and many people will die.”i