TRENDING NEWS
GMT+1 12:36
Home FEATURES “Bring am, we get change” and the Nigerian Police 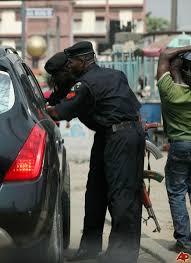 “Bring am, we get change” and the Nigerian Police

Posted By: Editoron: May 03, 2020In: FEATURES, NEWSTags: No Comments
Print Email

That the above statement is an interpretation of the deeds of the police on the highway is no news; that it is a brisk business for the men is to put it mildly; that it has become a virus, spreading fast among other forces is to speak the obvious.

It has become common place that those people saddled with the responsibility of hijacking criminality have found themselves enmeshed in the act of extortion which has assume frightening dimension with the authorities forcing hapless motorists to give them money and even provide them with change.

Recently, there has been serious cases of extortion and harassment of businessmen in the South-East, and some troubled states in the north where security men were deployed to restore peace.

Meanwhile, many Nigerians had heaved a sigh of relief when the Inspector-General of Police, Mohammed Adamu recently banned police checkpoints across the country. Policemen generally complied. But, with the reported resurgence in the country, it has become imperative for the authorities of various security agencies in the country to map out strategies that will put a final stop to criminality in the country.

Opining on the removal of roadblocks from highways across the country, a senior police Officer, said it has drastically reduced accidental discharges and eliminated the N20 syndrome, as well as harassment of road users.

He said: “The withdrawal of police roadblocks has reduced 80 per cent corruption in the Nigeria Police. These roadblocks were centres of corruption, which dented the image of the Force. With the removal of the roadblocks, the accidental discharge, harassment and human rights abuse have reduced as well.

“Measures put in place for the past one year have led to drastic reduction in complaints against members of the Force,especially extra-judicial killings and N20 syndrome.

“In improving police image and enforcement of fundamental human rights, there has been increased media presence through proactive response to media and public enquiry, greater synergy between police and other security agencies.

The Manufacturers Association of Nigeria in Anambra, Enugu and Ebonyi states have alleged that businessmen in the South-East are losing faith in the Federal Government and the security agencies. The Chairman of the association in the three states, Chike Obidigbo, reportedly said, “With the Federal Government’s failure to tackle the security situation in the South-East and the manner the Police, Customs and National Agency for Food and Drug Administration and Control officials keep harassing our business people, preventing them from bringing in their goods, business is gradually being grounded in the South-East.”

Also in the north, Police at most of the road blocks do not perform their duties of checking, but  only aked the driver to give them money. it is imperative to know that motorist who park their cars are those who do not want to give the usual N20 which has currently increased to N50 and above with the introduction of minimum wage.

Sadly for the security of the country, cars with tinted glasses are allowed to pass unchecked. and the Police in those places either make attempt to beg or salute the car without knowing who is inside.

Prior to the ban on roadblocks, the rate of extortion was unbearable. Then, between Sagamu, in Ogun State, and Onitsha, Anambra State, one could count hundreds of checkpoints on the road. And the main target then was not to arrest the bandits that frequently waylaid people on the road, but to collect bribes from motorists and businessmen.

Presently, the situation in Kaduna, Plateau and Nasarawa states in the north central is alarming.The Police and the Soldiers who manned the road blocks are only interested in what the driver will give them. Instead of the normal stop and search, they stretch their hand in the vehicle for money; and in sitations where the driver does not have change, their next comment will be, “bring am, we get change”.

It is in view of this that the Human Rights Watch, a global non-governmental organisation,  in 2010, described the Police as the most corrupt institution in Nigeria. The report further alleged that the Police made N20.35bn from extortion in the country between January 2009 and June 2010. Out of this figure, N9.35bn was said to have been realised from the South-East; South-South yielded N4bn; South-West, N4bn; North-Central, N2bn; North-West and 303North-East, N500m each. This amount of money, according to the report, was a fraction of what the security agents made from illegal collections in the country.  No large police force will ever get rid of every bad apple from its ranks. But the IG must make a scapegoat of some extortionist cops giving the Police an awful image and putting the nation’s security system in jeopardy. It is time to ensure that such incidents are not only investigated but the culprits are punished.

This same scenario plays out at the international airports as security agents exploit businessmen and travellers who are ignorant of their rights. Besides, a 2011 investment assessment of Nigeria by the World Bank indicates that 80 per cent of businesses in Nigeria pay bribes to government officials. According to the report, the micro enterprises pay approximately 4.3 per cent of a contract value to secure government contracts. To recoup this money spent on bribery, entrepreneurs inflate the prices of their goods or services.

Incidentally, some of these businessmen are those that had run away from the North as a result of the activities of the Boko Haram terrorist group. They could get frustrated and engage in criminal activities if they would not be allowed to do their genuine business without harassment.

Already, extortion by security agents has worsened the security situation in the country. Security agents who collect bribes do not usually bother to properly check goods that pass through the ports and borders. This may have accounted for the proliferation of illegal arms and ammunition in the country. The sophisticated ammunition armed robbers and terrorists use these days did not come into the country from the space. They passed through ports and borders.

Judging by these, the security agents have compromised and sold their integrity for a polimar note. It shows that they can do anything to get money. Nowonder reports in some quaters alleging that the security agents were paid to to take sides in crisis situation is a pointer to how quest for money has eroded the security system.

Based on this, pundits are worried that if the federal governemnt does not take stringent measures to deal with those found culpable,then it will have to licence the Nigerian people to defend themselves whenever the scrupulous security agents tend to demonstrate their highest sence of irresponsibility.