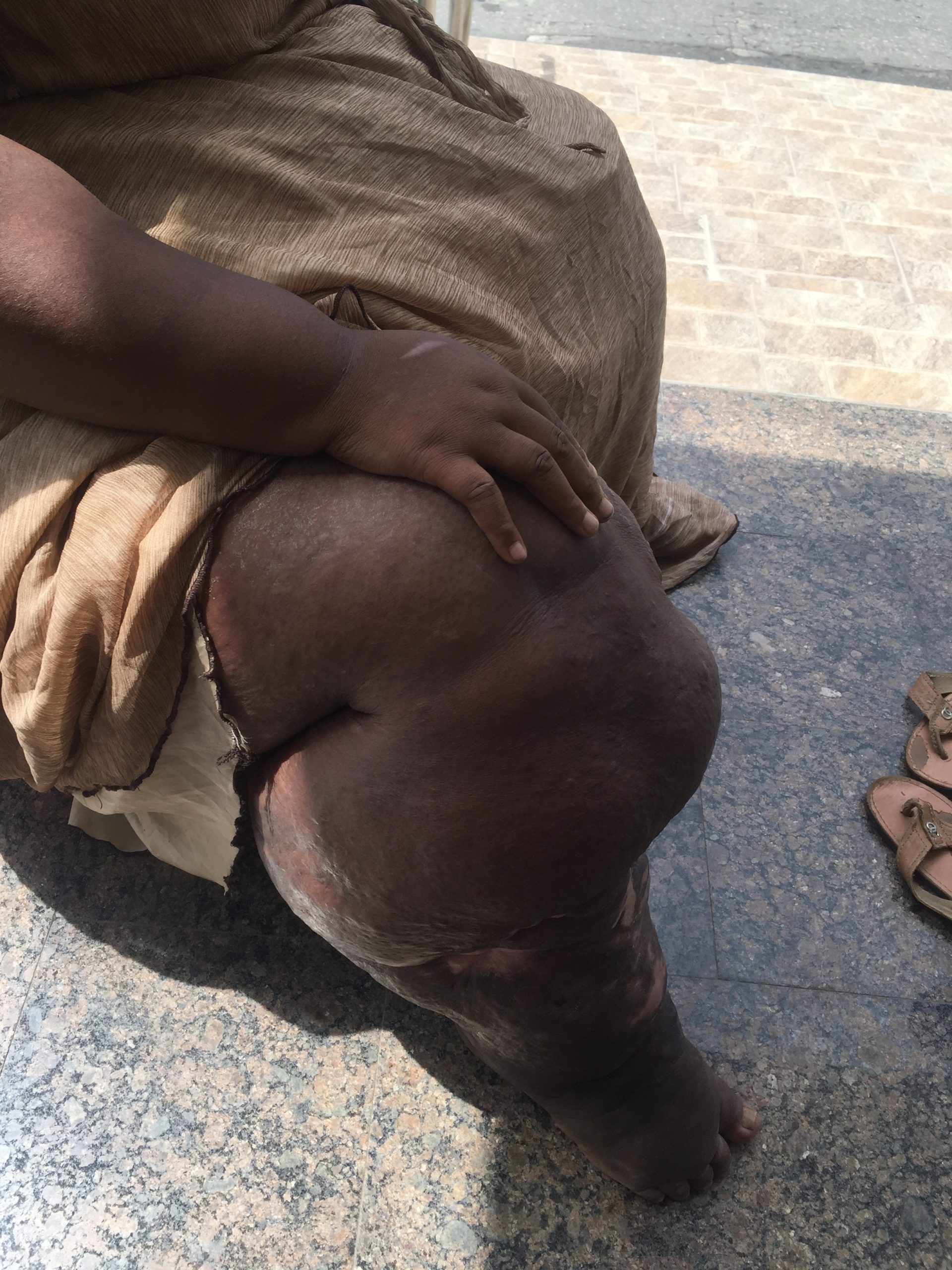 How elephantiasis cripples mother of 3

40 years old Mrs Adewole (not real name), is currently passing through serious pain, and perhaps she will live with it for the rest of her life.

Mrs. Adewole, an elephantiasis patient from Oyo state, Nigeria, said she first noticed the sign in 2012. She told our reporter that while working at her photography studio, she started feeling chills, fever, weakness of the body and rashes on her right leg. “I went to the hospital and the doctor gave me antibiotics and discharged me. It came back again in 2014, this time the leg was swollen with rashes. I went back to the hospital again but they gave me another antibiotics and discharged me.

“In 2018, it got worst, and my leg began to look bulky and lumpy with stiff, tough skin. There was also pain in the swollen area, releasing pulse before it busted after sometime. I had to go on crutches for support. During that period, someone directed me to the hospital at Oyo (old Oyo town), where we were living. There, the doctor gave me a drug which he said is taken once a year.”

She said the condition made her feel unusual, and had to slump on her way home during one of the incidences, owing to fatigue and dizziness caused by the disease.

“The rashes and the pulse are common occurrences for me and very painful too. Most times reddish in colour. Currently, I can’t walk 10 steps because of pains and tiredness. I also cough a lot and cannot do anything at the moment.”

The patient who was a photographer, told our reporter that she has three children and was supporting them with her daily earning before her situation got worst.

“ The eldest of my children is in the university, while the two younger ones are in the secondary school. I currently rely on my mother and my siblings for support. My husband ran away the very first time he saw my condition at the hospital. He was asked to buy drugs for me but we didn’t see him again.”

Speaking on her condition, Emmanuel Davies, Deputy Director/ Programme Manager, National Lymphatic Filariasis Elimination Programme of the Federal Ministry of Health Abuja, said Elephantiasis, which is also known as Lymphatic Filariasis (LF) is caused by Wuchereria bancrofti and transmitted by infected female mosquito (Anopheles & Culex spp.) during human blood meals. He added that the life span of the adult LF parasite is between 4-6 years.

“Major chronic stages of the disease are Lymphodema, Elephantiasis and Hydrocele. It takes 10 years or more for the clinical manifestation of LF disease in an infected persons. The two main approaches for LF elimination are:
Mass Administration of Medicines (MAM) –ivermectin (3mg) and albendazole (400mg). MMDP(morbidity management and disability prevention).”

At a media dialogue organised by the Child Rights Information Bureau (CRIB) of
Federal Ministry of Information and Culture in collaboration with the UNICEF, Davies said when the situation gets to that of Mrs Adewole, there is no medical cure for it. He said the only solution is to; Wash and dry the swollen areas daily, Use moisturizers, Check for wounds and use medicated cream on any sore spots, Exercise, and walk when possible, If your arms or legs are swollen, keep them elevated when you’re lying down or seated.

As a way to nib it in the bud, he said the federal government started LF Mass Administration of Medicines (MAM) in Nigeria in 2000. “The LF medicines are given once a year to eligible persons 5 years and above. The ineligibles people: >5years persons, pregnant women and very sick persons.

While noting the cost of drugs for elephantiasis, Davies said the FMOH is advocating for funding support to scale up MAM in the remaining 16 LGAs of the 4 States before end of 2020.

“FMOH will solicit for funding support and collaborate with relevant stakeholders to mitigate gaps in assessments and supervision. FMOH will continue to seek WHO support for procurement and early delivery of diagnostic tool. FMOH will encourage States to report LF MMDP. FMOH will work with the media for publicity of programme for support.

He said 1.5 billion people are affected by these diseases globally with 40 per cent of whom live in Africa.

According to him, findings have shown that 122 million persons are at risk of contacting one or more of the disease.
“Two out of every three Nigerians are at risk of one or more of these neglected tropical diseases.
“Out of which 20 percent are pre-school aged children; 28 percent, school aged children (5-14 years) and 52 percent, adult age – 15 and above,” he said.
Anyaike also identified poor funding and lackadaisical attitudes of government as major challenges in eliminating NTDs in the country.