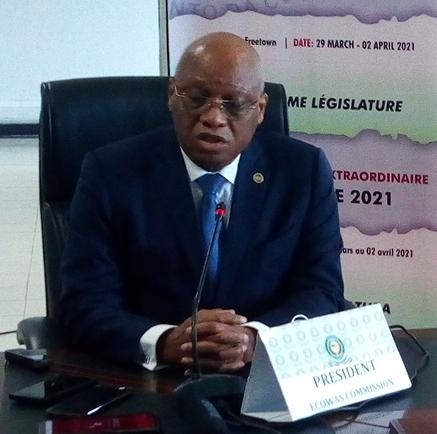 Posted By: Editoron: March 31, 2021In: NEWSTags: No Comments
Print Email

The Community Parliament of ECOWAS, has appealed to the President of Sierra Leone, Dr. Julius Madda Bio to lead the campaign for direct universal suffrage at the level of the Authorities of Heads of States and Government of Economic Community of of West African States, (ECOWAS).

He noted that the Parliament under his leadership is committed to the call for direct election of members to the ECOWAS Parliament.

Hon Tunis said that as one of the highlights of the strategic plan, “I want to reiterate that call”.

“I seize this opportunity to call on Your Excellency, Mr. President, to kindly grant this your unwavering support by serving as the champion of this cause at the level of the Authority of Heads of States, as its success will guarantee that the people have vested interest in civic affairs and being actively involved in the decision-making processes at all levels and in all dimensions”.

The Speaker said that the Parliament, since its formation in 2000, has sufficiently endeavor to perform its role diligently.

He however, lamented that the election of Members by direct universal suffrage, the power to initiate legislation and the Parliamentary Ombudsman remain noticeable casualties.

He said: “That is why during the inauguration of the 5th Legislature, I identified the election of members by direct universal suffrage as a key policy agenda of my tenure.

“In order to achieve this, I immediately established an Ad hoc Committee which comprises of 16 Members of Parliament and chaired by the Honorable 1st Deputy Speaker, to review the feasibility of achieving the election of Members to the Community Parliament by direct universal suffrage.

“The Committee successfully held its first meeting in Lagos and the report from that meeting was adopted during our last session. More engagements are on the way and the prospects of achieving this are high.

“You would all agree with me that direct election by the people we serve creates a sense of responsibility in the leaders and makes them realize that they have been chosen by the people to perform in a patriotic and dedicated role”.

The Speaker added that this will compel them to use the power and authority they have in a positive way for the benefit of the masses.

“We believe that unless people participate in the development process, our set targets and objectives cannot be fully attained,” he conclueded.

Also speaking, President Bio said he support the need for direct universal suffrage to promote accountability in the representation process.

He noted that the Speaker’s position on direct elections of members of the Community’s Parliament by universal suffrage is necessary.

Bio further pledged to lead the campaign at the highest level.

“I am certain that the Authority of Heads of State of the community will discuss this all-important matter when it is laid before them”.