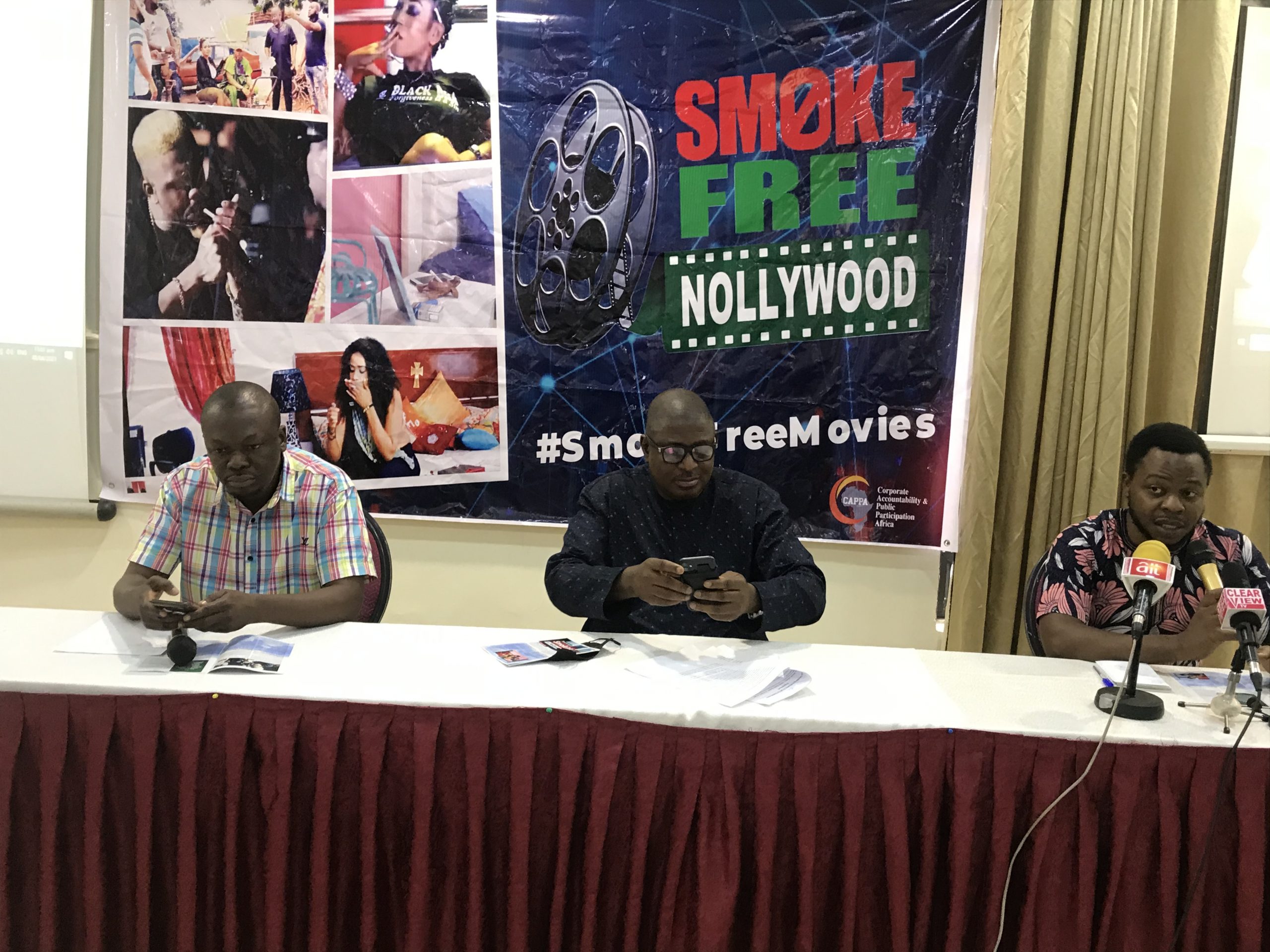 Posted By: Editoron: April 11, 2021In: NEWSTags: No Comments
Print Email

Corporate Accountability and Public Participation Africa (CAPPA) has called partnered Kannywood, a major Hausa movie industry in the north, with the aim of ensuring total ban of smoking in movies.

The NGO was worried over how tobacco has smoking scenes have become common place in various movies.

Currently, Nollywood, Kannywood and all other movies in the country have become a subtle hub for tobacco advertisements.

“What we are gathered here to discuss is one of the open flanks that the tobacco
industry has continued to exploit to woo and addict our kids to the smoking habit.
The tobacco Industry has for years exploited the entertainment sector (films and
music videos) to entice and conscript young people into smoking. This practice
has long been documented across the globe and has informed the need for some
form of regulation of contents accessible to the young. Such regulations are in
place in the US, India, Canada, and some other western nations.”

He quoted the World Health Organisation (WHO) former director, Dr. Douglas Bettcher, as saying; “With ever tighter restrictions on tobacco advertising, film remains one of the last channels exposing millions of adolescents to smoking imagery without restrictions”.

Bode, said Nigeria’s weak tobacco control regulations and poor enforcement has also been exploited by the tobacco industry which continues to glamourize smoking on set and in music videos.

“Since 2020 CAPPA has been spearheading advocacy efforts at building a critical
mass to confront the industry’s tactics of wooing the young and un-informed
through films and music videos. The need to checkmate the industry and compel
stakeholders in the sector to play active roles in the introduction of stringent
measures to curb the industry’s strong hold on the youth population informed
the need to organise this parley as follow-up to the first held on November 21,
2020 in Lagos with entertainment stakeholders.

“Our decision to engage with Kannywood stakeholders in the north is informed by
a research carried out carried out by CAPPA in 2020 to get a clear picture of the
depth of the depiction of smoking in Nigerian movies. The research looked at
recent films from the three major ethnic groups in Nigeria (Igbo, Yoruba, and
Hausa) sold in the open market and the indirect ways they were used to advance
tobacco products. Thirty-six recent films were chosen from the three ethnic
groups as case studies. Although this number might be considered small, it was
however representative enough for the purpose of this study. The genre of the
films studied are at the time the study was conducted the most popular among
the youths as majority viewers and consumers of the films confirmed.”

Bode said people who responded to CAPPA’s questionnaire on the Hausa movies agreed that all the 12 films had smoking scenes and glamorized smoking.

“Our engagement here today is because, like we observed in other parts of the
country, the youths are the largest patrons of the films produced and marketed in
the country. We are therefore elated to work with Kannywood stakeholders to
rollback this menace starting with the films they produce. Kannywood
stakeholders are key because they are role models, influencers of our youths and
relevant in ensuring Nigerian films are compliant with the WHO-FCTC and
Nigeria’s National Tobacco Control Act and its Regulations

Also speaking at the event, Michael Olaniyan of Campaign for Tobacco Free Kids (CTFK) said there is preponderance of smoking in most Nigerian films and called on stakeholders to help enforce total ban on all forms of tobacco scenes in our movies except when used for journalistic accuracy.

He recalled that “the National Tobacco Control Act which was passed in
2015 and the National Tobacco Control Regulations 2019 contain provisions prohibiting tobacco advertising, promotion and sponsorships in movies
and entertainment, with some exceptions. Though the Advertising Practitioners Council of Nigeria (APCON) is the agency saddled with the implementation of the
ban on tobacco advertising, promotion and sponsorships generally, there are a number of government agencies that regulate the entertainment sector, while the entertainment industry has many pressure groups, coalitions, etc.

“Sections of the Act relevant to smoking in movies and music videos Sec. 12(1) of the Act, defines “tobacco advertising and promotion” to include “any form of commercial
communication, recommendation, or action with the aim, effect, or likely effect of promoting a tobacco product or tobacco use directly or indirectly.” Sec. 12(1) of the Act also provides for a comprehensive ban on tobacco advertising and
promotion, stating: “no person shall promote or advertise tobacco or tobacco products in any form.”

In their separate submissions, the duo of a Movie Director, Kannywood, AbdulGaniyu Bashiru; and the Chairperson of Kannywood Women Association of Nigeria (K-WAN) Hauwa Bello, expressed Kannywood’s readiness to collaborate with CAPPA and Campaign for Tobacco-Free Kids to address menace associated with smoking scenes in movies and music videos.