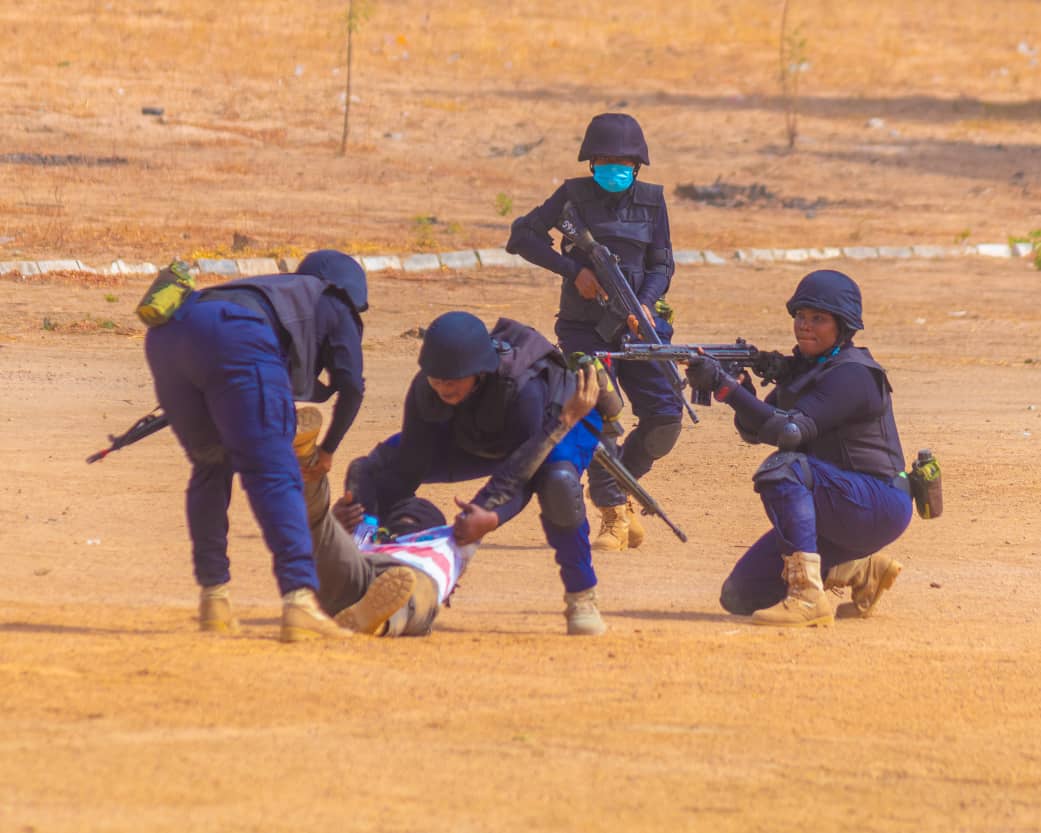 Posted By: Editoron: May 21, 2021In: NEWSTags: No Comments
Print Email

Minister of Interior, Rauf Aregbesola has commended the leadership of Nigeria Security and Civil Defence Corps for taking the lead in establishing a Female Squad as part of strategies to address the present security challenges confronting the nation.

NSCDC in a statement issued yesterday by Olusola Odumosu, Director, Public Relations, said Aregbesola gave the commendation at the passing out ceremony for members of the newly established Civil Defence Female Squad after an intensive and very rigorous four weeks training at the NSCDC Training College, Katsina.

The Minister who expressed his delight over the initiative said the move will no doubt add value to the security architecture of the country, while at the same time enhancing the capacity and operational efficiency of the Corps.

Speaking on the significance of women in the fight against terrorism, banditry, kidnapping and other forms on insecurity, Aregbesola reiterated that since women account for more than half of the nation’s population, it is very apt to include them in all aspects of nation building as studies have shown that women are more likely to attract the cooperation, confidence and trust of the citizens than their male counterparts.

He maintained that the spike in security challenges in the country occasioned by the activities of Boko Haram insurgency, armed banditry, robbery, kidnappings, farmers/herders clashes among others necessitated the clamour for security agencies to redouble their efforts by strategizing to provide a safe and secure environment, where meaningful development can thrive.

He assured the leadership of the corps of the President’s resolve to continue to enhance the capacity of the NSCDC to effectively deliver on its mandates through adequate funding and provision of modern security equipment.

Aregbesola urged the newly established Female Squad to exhibit high level of discipline, focus, vigilance and mental alertness in discharging their responsibilities while calling on the citizens to provide operatives with actionable intelligence that will assist in finding lasting solution to the problem of incessant kidnapping of school children for ransom.

On his part, the Commandant General of the Nigeria Security and Civil Defence Corps, Dr Ahmed Audi, mni, maintained that the female squad was a child of necessity, borne out of the need to effectively curtail the recent upsurge of insecurity and to pro-actively engage bandits and kidnappers of school children as directed by the Federal Government on the implementation of the safe school initiative by the Corps.

Dr. Audi said the frequency of attacks on schools by bandits who indulge in kidnapping of students for ransom has made it imperative to focus attention on intensifying security within and around vulnerable school’s environments across the country; “This is a proactive step aimed at ensuring safety of school children and restoring the confidence of students, parents, teachers and the host communities” he said.

According to Audi, the corps has concluded a vulnerability survey on all schools in the country to collate data with a view to identifying the gaps in the existing security arrangement for schools in Nigeria and to give the corps needed clues on necessary strategies to adopt in enhancing safety in the Nation’s schools, especially those that are susceptible to attacks.

A highly elated CG congratulated all the members of the Female Squad for their outstanding performances and show of commitment in the last four weeks of intensive training. He charged the graduands to bring the knowledge gained in the cause of the training to bear in the discharge of their duties and to desist from any act capable of dragging the name of the Corps in the mud as anyone caught will be dealt with accordingly.

He admonished the Squad to be solution providers to the myriads of security challenges bedeviling the nation as they get commissioned and to give their best in the tasks ahead while also assuring that their welfare will not be compromised, rather, he would create an enabling environment for them to thrive and as well showcase their dexterity as they will be immediately deployed for the new assignments they were established to carry out.