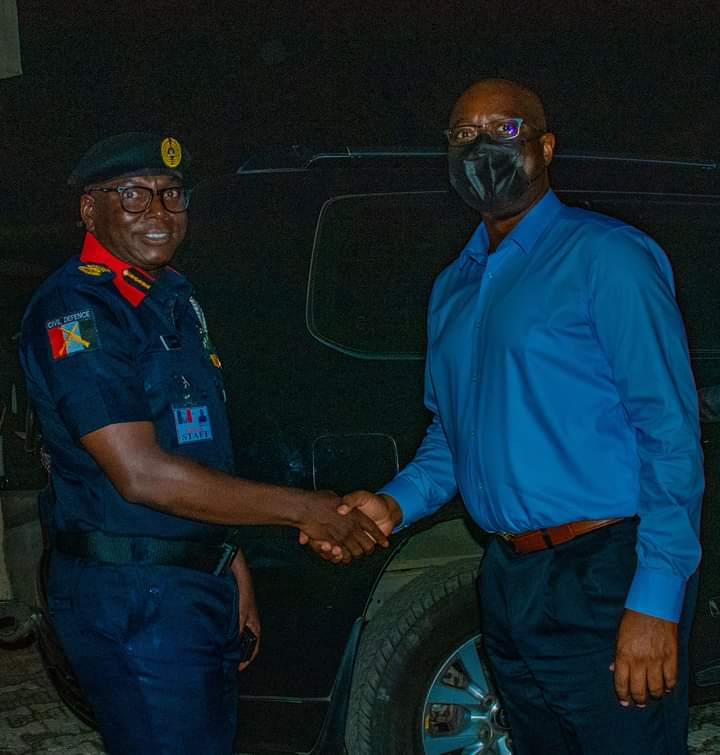 Posted By: Editoron: September 11, 2021In: NEWSTags: No Comments
Print Email

The Oyo State Governor, Engr. Seyi Makinde has promised continuous support to the Nigeria Security and Civil Corps (NSCDC), in carrying out its security duties and obligations to the citizens of Oyo state and Nigerians in general.

This is in the governor’s bid to rid the state of all forms of criminality.

He made this commitment while on a courtesy visit to the Commandant General, Ahmed Audi, at the Corps National Headquarters, Abuja, where he congratulated the CG on his new appointment and expressed satisfaction on his performance so far as a pragmatic leader who has given the Corps a facelift within a very short period.

A statement issued yesterday by the corps’s PRO, Olusola Odumosu, said Engr. Makinde maintained that his government will support and motivate the Corps in order to contribute more to the maintainance of peace and order in the state such that citizens can go about their legitimate businesses and be free to reside in any parts of the state without fear of attack, harassment or molestation by criminals and hoodlums.

He appreciated the CG for the deployment of Commandant David Adaralewa to Oyo State Command, and described him as a thoroughbred officer who has been working assiduously to fight crime in the state with renewed zeal and commitment. Reiterating that his government enjoys enormous cooperation from all service commanders including the Civil Defence Corps.

He assure the CG that he will not be far from the Corps and would try in his capacity as the siting governor to give strategic support to encourage, motivate and boost the morale of corps personnel to give their best and function effectively to fulfil his desire of making the Oyo State one of the most peaceful state in the country.

In reaction, the Corps helmsman, Dr Audi, appreciated the Governor for taking time out of his very busy schedule to visit the Corps, as this provided an opportunity to deliberate on some garmaine security and policy issues which is critical to development and sustainance of strategies to enhance the state security architecture.

Audi stated that NSCDC will continue to support the governor in his effort to guarantee law and order, peace and tranquility in the state by effectively delivering on its mandate and ensuring that all criminal elements within the state, including vandals of our collective wealth and assets are prevented from carrying out their nefarious activities.

He further stated that the new state Commandant has his full backing to deal decisively with lawbreakers and flush out all criminal elements in the state from their hideouts. Reassuring that the Corps will continue to safeguard lives and protect critical public and private assets and infrastructures in the state without fear or favour or any form of compromise.

The CG stressed further that the Corps will not condone any form of indiscipline or sabotage from it’s personnel or anybody whatsoever but will strive to ensure a peaceful ambience as the Corps Rapid Response Squad would be utilised effectively to promote peace and combat all the enemies of the state.

Dr Audi thanked the governor for his support to the Corps over the years and equally seized the opportunity to demand for more cooperation and donations of equipments such as operational vehicles, ambulances, motorcycles to navigate difficult terrains, communication gadgets, protective equipments and so on.

He informed the governor of plans to unveil the Female Squad in the state to tackle specialized crime and protect the vulnerables in the state, most especially women and school children who are mostly soft targets with high ransom values for bandits and kidnappers.