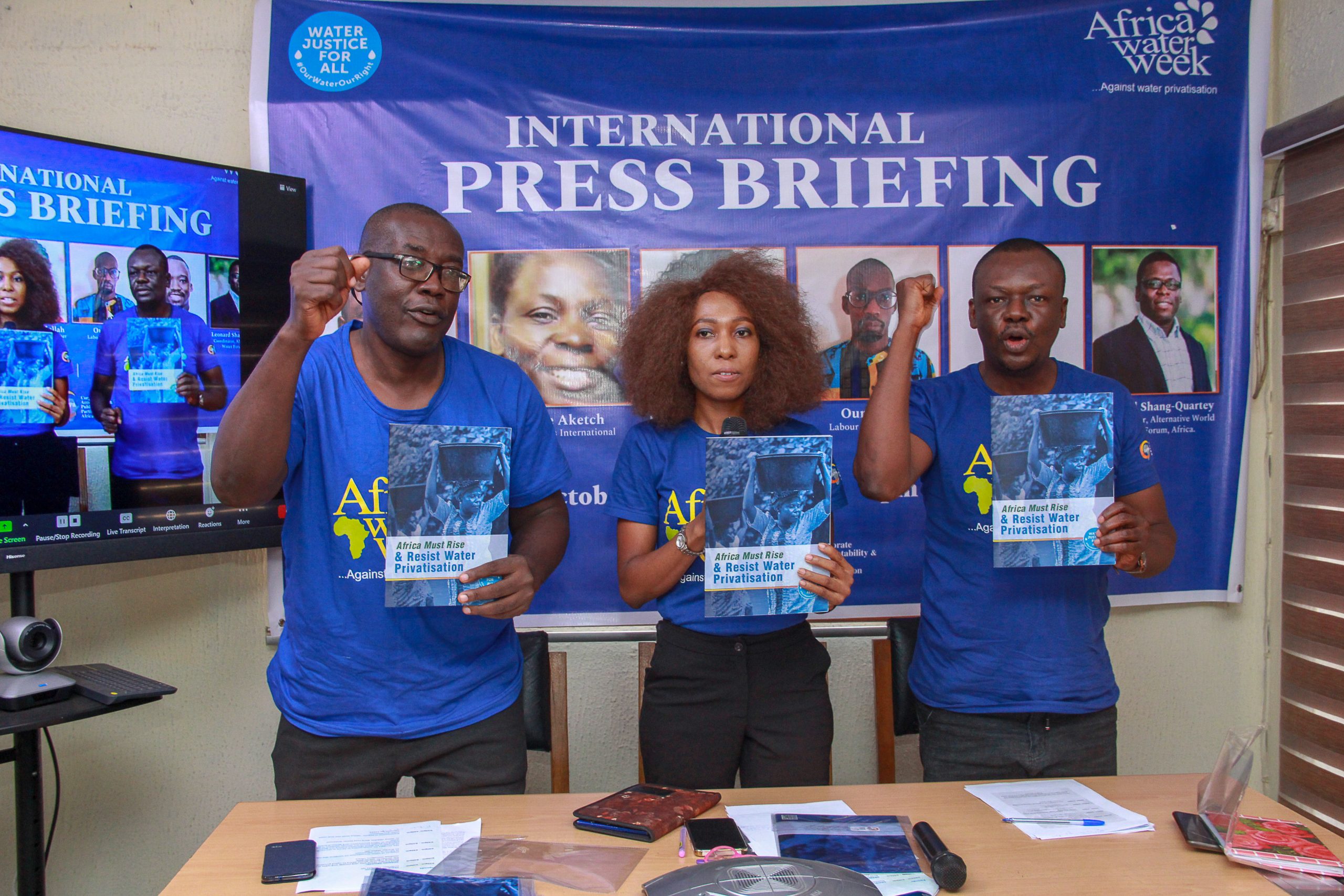 Posted By: Editoron: October 13, 2021In: ENVIRONMENTTags: No Comments
Print Email

Civil society and labour activists on the platform of the Our Water Our Right Africa Coalition have called on African governments to reject water privatisation and demand the return of water systems seized by private corporations back to the hands of the African people to be publicly funded and equitably managed.

The coalition made the demand on Wednesday, during an international press conference where the report – Africa Must Rise & Resist Water Privatisation was launched as part of activities lined out to mark the Africa Week of Action Against Water Privatisation which began on 11 October 2021 and runs through 15 October.

The week of action coincided with annual meetings of the World Bank and International Monetary Fund (IMF), institutions which the coalition found are among the biggest drivers of water privatisation in Africa.

Africa Must Rise & Resist Water
Privatisation detailed how privatisation has become the most potent threat to Africans’ human right to water and cited water privatisation failures in the United States, Chile, and France as lessons for African governments being pressured by the World Bank and a host of multilateral financial institutions to toe the privatisation path.

They insist that while water remains one of the most fundamental necessities for life, giant corporations like Veolia and Suez, backed by international financial institutions like the World Bank are exploiting this basic need by trying to privatise water across the African continent, threatening to leave millions of people suffering without water.

Akinbode Oluwafemi, Executive Director of CAPPA, who detailed the need for community and labour resistance to privatisation said:
“No matter where you are from on this continent, the threat of water privatisation is real. Corporations and institutions like the World Bank are trying to suck water and profits out of Africa as though they have a massive drinking straw. But Africans say no—our water, our right. We do not need international financial institutions or corporations to take care of our people”
On the impacts of water privatisation on workers in Africa and the role of labour in the movement confronting it, Dr. Everline Aketch, Sub-regional Secretary for English-Speaking Africa, PSI said:
“As labourers and citizens, we are guardians of good governance. So, the labour movement joins civil society in saying that water is life. When governments move to allow water privatisation, it means they are trying to kill our people.”
In connecting the struggle for water justice in Africa to the broader Pan-African movement for Black liberation, Dr. Melina Abdullah of Black Lives Matter Grassroots said:
“It is an African principle that people should share in and have a right to the world’s resources. The idea that water could be privately owned is a white supremacist notion. Access to water should be a human right, not something held by white supremacist capitalism.
“When we say Black Lives Matter, that is not only a fight to end state sanctioned violence and police brutality against Black people. It is also about any form of injustice against Black people and people of color all over the world through capitalist policies such as privatisation of social services, including water. So, we must stand against privatization everywhere.”
On their experiences fighting water privatisation and injustice in Cameroon and Senegal, as well as the power of organizing, the Africa Center for Advocacy, Cameroon, and Syndicat Autonomes des Travailleurs de l’Eau du Sénégal share insights:
Younoussa Abbosouka, Advocacy officer, ACA, Cameroun said:
“Cameroon has already weathered one storm brought about by water privatisation. Now, our government must protect us from the pressure of the World Bank, which brings strong winds blowing in favor of profits, not people. Protect Cameroon and guarantee clear skies ahead by investing in public water”
Oumar Ba, Environmental engineer, (Syndicat Autonomes des Travailleurs de l’Eau du Sénégal) insists:
“Everyone needs water to live. In Senegal, I have witnessed the impacts of water privatisation, and I know that Suez’s control of our water system is a threat to the future of Senegalese people. Water must be a public resource, not a privatised commodity.”
Leonard Shang-Quartey, Coordinator of the Alternative World Water Forum, Africa also exposed the World Bank’s plans to ensure its privatisation plans advance unchallenged in Africa. Hear him:
“The determination of the World Bank to grab Africa’s water is the reason why the World Water Council wants to hold the so-called World Water Forum in Africa in March of 2022 in Senegal, one of the few countries where public-private partnership in water is still running despite huge failures and havoc it has caused the people.”
The Our Water Our Right Africa Coalition insists that government leaders must invest in public water systems that include meaningful public participation in water governance, with particular focus on the perspectives of those typically left out of decision-making processes, including but not limited to women, low-income people, and rural communities.
A position statement shared by the coalition reinforcing its opposition to water privatisation and voicing demands to governments, corporations, and institutions has been endorsed by over 100 organisations from around the world.