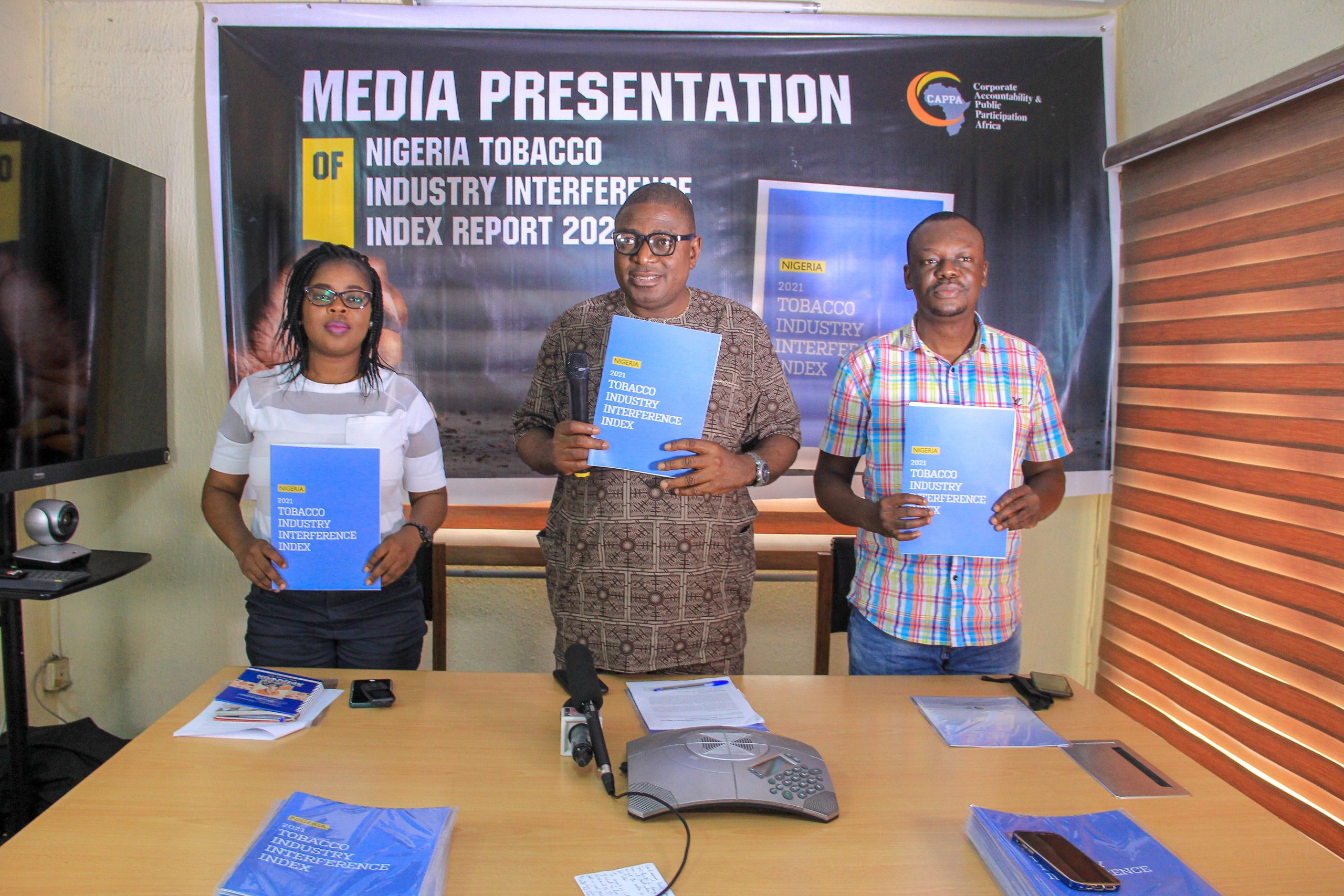 Posted By: Editoron: October 28, 2021In: NEWSTags: No Comments
Print Email

The Corporate Accountability and Public Participation Africa (CAPPA) has cautioned that tobacco industry are interfering in Nigeria government policies  on tobacco industry.

CAPPA made this disclosure in a press briefing in Lagos yesterday, saying that
these demands formed part of recommendations by CAPPA in the Nigeria Tobacco Industry Interference Index Report 2021 which it unveiled to the media in Lagos yesterday .

Speaking,while briefing the media,
CAPPA Executive Director, Akinbode Oluwafemi, said that like the rest of the globe, the tobacco industry in Nigeria has consistently interfered unnecessarily in tobacco control policies and unlawfully embarked on corporate social responsibility activities in clear contravention of the National Tobacco Control Act 2015 and the National Tobacco Control Regulations 2019.

Giving a breakdown of the findings contained in the report, Oluwafemi explained that the tobacco industry still participates in policy development in Nigeria and enjoys consistent invitations from different agencies to their meetings where supposed classified resolutions on standards are discussed, and agreements are reached.

He expressed reservations about tobacco industry corporate social responsibility engagements, citing the British American Tobacco Nigeria Foundation (BATNF) partnership with the National Youth Service Corps (NYSC) – a federal government youth scheme to supposedly empower young agriculture entrepreneurs financially as a scheme that should be considered an anomaly as the Foundation uses the opportunity to promote its name.

He also revealed that unnecessary interaction between the tobacco industry and government is particularly more noticeable in the agriculture sector and in some committees set up by the government which makes interactions with public officials plausible.

The CAPPA Programmes Director, Philip Jakpor listed several states that had robust relationship partnerships with the tobacco industry in the implementation of their FADAMA schemes. They include the Benue, Ebonyi, Kaduna, Kogi, Kwara, Niger, Ogun and Osun States, among others.

Jakpor revealed that the Lagos State Agricultural Development Authority (LSADA) has a long history of partnership with the BATNF.

He pointed out that though the National Tobacco Control Act 2015 and the National Tobacco Control Regulations 2019 provide for transparency and accountability in government dealings with the tobacco industry, some states and federal government officials still hold meetings and interactions with the tobacco industry without publicly divulging the details.

Others are the need for synergy between the federal and state government in putting in place processes for full disclosure of minutes and proceedings of meetings and interactions with the tobacco industry should be institutionalized.

The Ministries, departments, and agencies of government should consistently update their websites and other information platforms for easy information dissemination and transparency.