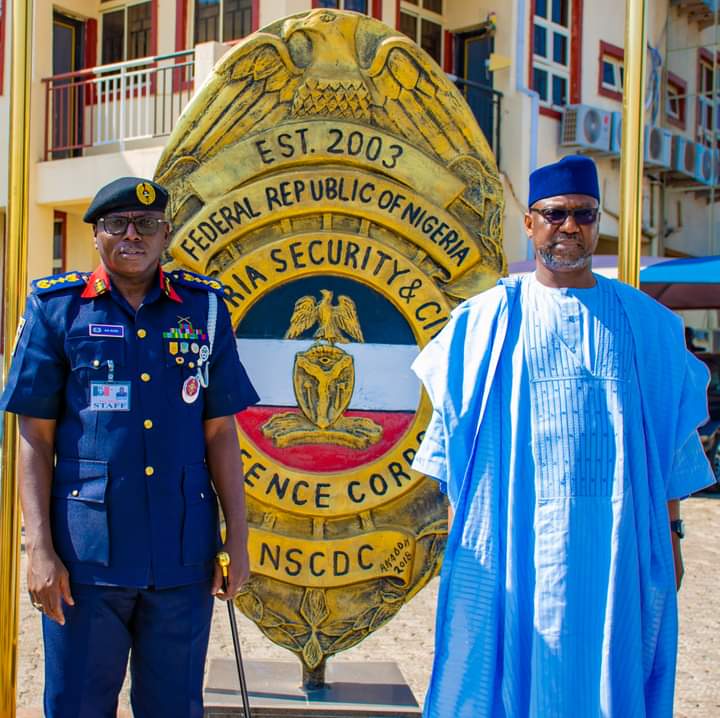 Posted By: Editoron: November 26, 2021In: NEWSTags: No Comments
Print Email

The Commandant General of the Nigeria Security and Civil Defence Corps, Ahmed Abubakar Audi, has assured Nigerians of the Corps’ commitment to tackling the menace of kidnapping, abduction, banditry and other criminalities in the country.

A statement issued on Friday by NSCDC spokesperson, Olusola Odumosu, said the CG gave the assurance during a courtesy call to his office by the Executive Governor of Niger State, His Excellency Alhaji Abubakar Sanni Bello who lauded the CG for his pragmatic approach to the fight against Insecurity in Nigeria.

Governor Abubakar Bello noted that since the assumption of office of the Commandant General of NSCDC, there has been a paradigm shift in the policies and programs rolled out by the Corps towards solving the nation’s security challenges.

“We are aware of the deteriorating state of Insecurity in the nation; hence all hands must be on deck, the political class, government and individuals must support the security operatives by providing necessary logistics to enhance their operations”, he said.

While congratulating the Commandant General for his appointment by Mr President; Governor Abubakar reiterated that the State Government has made available an expanse of land and other temporary facilities for the smooth takeoff of Civil Defence Training College at Kotangora which is currently awaiting Inspection and subsequent possession by the Corps.

In his response, the NSCDC CG elucidated on the three mandates of the Corps which centers on Safeguarding all Critical National Assets and Infrastructure, Disaster management as well as Training, Supervision and Monitoring of Private Guard Companies.

He also reiterated on deployment of over 7,000 Specially trained Agro Rangers Squad with the responsibility of securing farmers and the Agro Allied Industries across the nation.