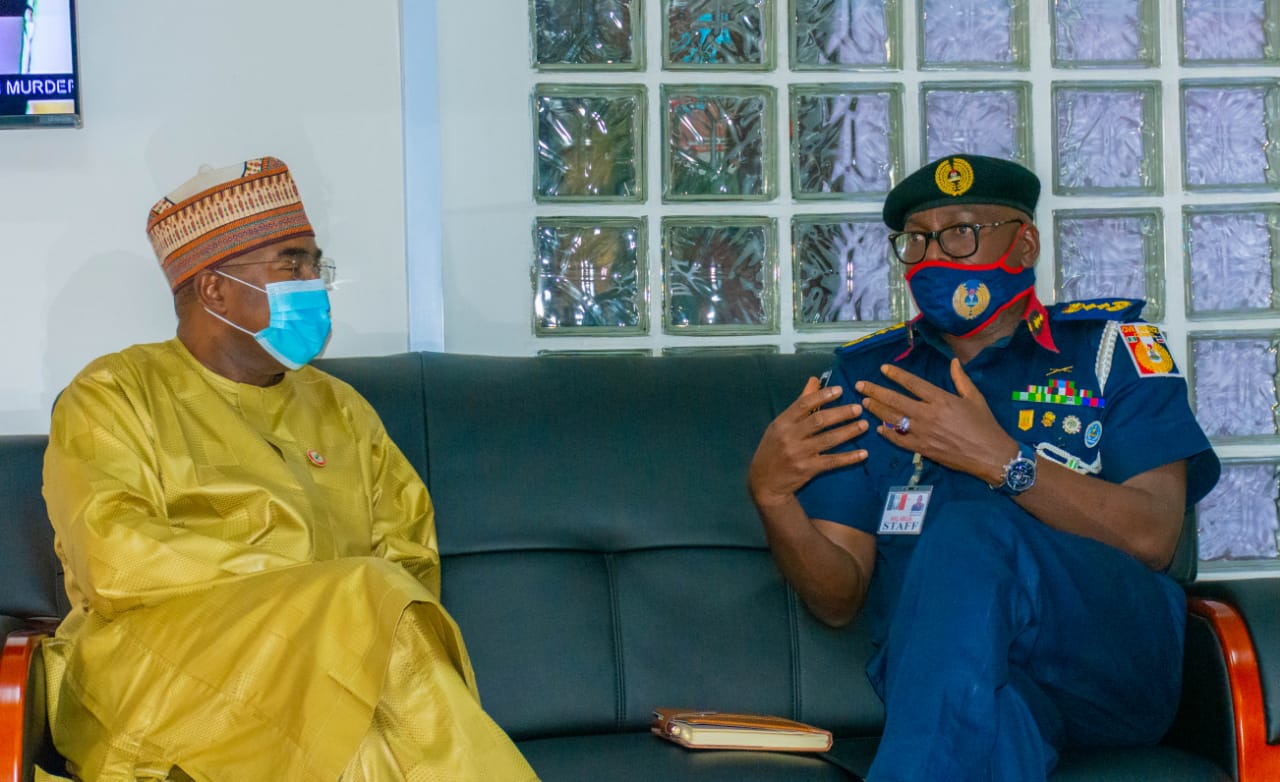 Posted By: Editoron: January 10, 2022In: NEWSTags: No Comments
Print Email

In a bid to address the menace of insecurity which oftentimes is attributable to intake of illicit drugs and substance abuse by perpetrators, the Nigeria Security and Civil Defence Corps (NSCDC) and National Drug Law Enforcement Agency (NDLEA) have agreed to partner in confronting the problem at the grassroot.

NSCDC in a statement issued yesterday by its spokesperson, Olusola Odumosu said the need for the collaboration was brought to the fore when the Commandant General of NSCDC, Dr Ahmed Abubakar Audi, paid a visit to the Chairman of NDLEA, Brig. Gen. Mohammed Buba Marwa in Abuja where he noted with dismay that consumers of illicit drugs indulge in different crimes after taking them because it serves as a catalyst for criminals and hoodlums to perpetrate daring dastardly acts like violence, kidnapping, banditry, armed robbery, murder among others.

The Commandant General explained that his visit to the Chairman was necessitated by his commitment to national service which is traceable to the impact of trainings he and other Corps personnel received from the armed forces, he further maintained that similar synergy from the NDLEA will help to enhance the capacity of staff while at the same time boosting the existing synergy between both agencies.

He highlighted some of the mandates of NSCDC as protection of critical national assets and infrastructure, disaster management, registration and regulation of Private Guard Companies. Other responsibilities given to the corps are protection of Agro allied investments under Agro Rangers Unit as well as mediation in crises situation.

In a bid to confront the menace of drug trafficking/abuse and other related crimes with renewed vigour, General Marwa declared that the fight is a collective one and this requires the participation of all security agencies and other critical stakeholders like members of the traditional institution who serve as veritable source of credible grassroot information and intelligence network.

The Chairman expressed satisfaction with the performance of NSCDC under the present Commandant General, noting that NDLEA will leverage on the relationship with the corps whose presence is felt in all the nooks and crannies of the country to vigorously fight drug abuse at the grass roots.

He commended the hard work and commitment of the new CG in cleansing the nation, stressing that the new CG’s leadership has brought tremendous value to the name of the organization in recent time especially with the safe school initiative program, the Agro rangers, fight against vandals and illegal bunkerers, fight against bandits, insurgents and so on.

While saying that drug abuse impinges on security, the NDLEA Chief Executive urged the present management of the Corps to give more attention to capacity building especially in intelligence which drive every successful security operations. He called on his counterpart in NSCDC to remain resolute and resilient in service to ensure that perpetrators of crime face the wrath of the law.

The NDLEA, noted that the world is in turmoil and all kinds of criminals activities especially drug abuse is prevalent, thus a renewed partnership with the Corps would help get the criminals to justice easily.