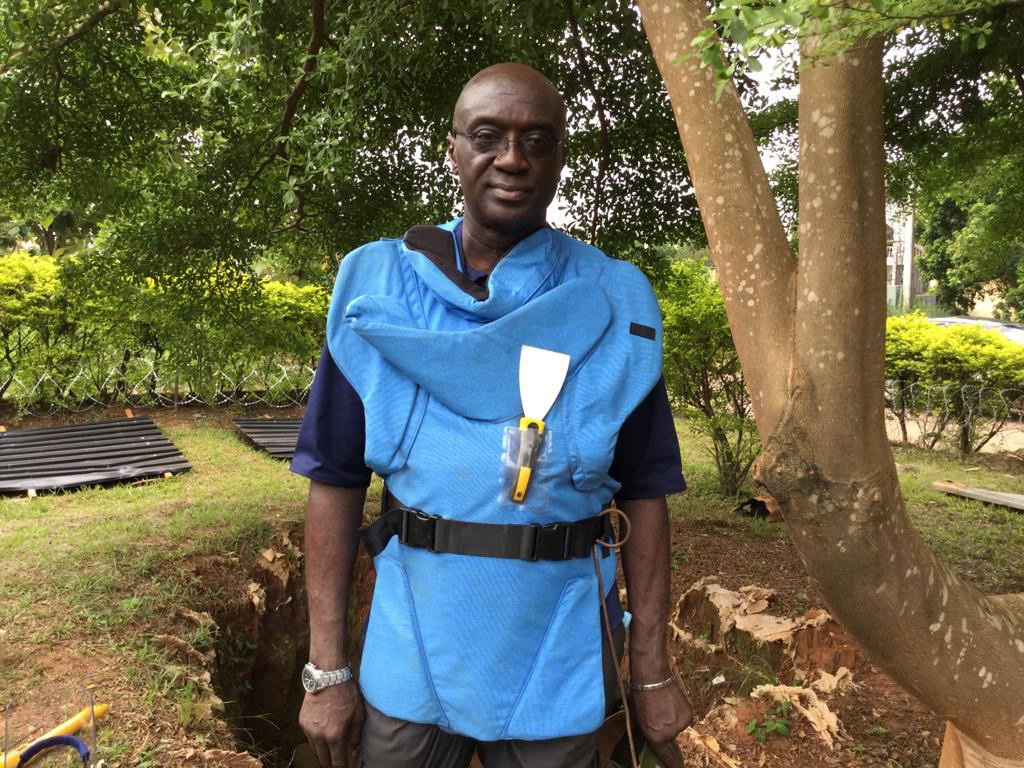 Posted By: Editoron: January 22, 2022In: INTERVIEWTags: No Comments
Print Email

A Deminer and Stockpile Manager in charge of clearance and deactivating the post Civil War bombs, Prof. Bala Yakubu in an interview with Tobias Lengnan Dapam, said the federal government is not doing enough in terms of mobilizing funds to clear the remaining post Civil War bombs eight years after they have been recovered, thus still killing people in the South-East. He also spoke on the challenges and other sundry issues. Excerpts:

Sir, how far have you gone with the clearance of the post Civil War landmines and explosives?

I am glad you asked me this question, a little background will allow you understand my case. At the level of the United Nations, in 1998 Nigeria assisted the Convention Committee to lobby about 52 other African countries to append to the Ottawa Convention also known as the Mine Ban Treaty. Nigeria also did. Nigeria at that time, knew how hazardous these military ordnance are to humans, especially civilians. As at that time, Africa had also had her own share of conflicts including civil wars i.e. Chad, Liberia, Sierra Leone, Angola.

This therefore means the Federal Republic of Nigeria knows how important the clearance of landmines and explosive remnants of war clearance is to the Nation for the safety of her people and in terms of economic benefits of cleared land vis a vis agricultural produce, infrastructural development and saving the lives of her people living in Mined areas of the Nigeria Biafra War. It is thus surprising the self imposed impediments that came into play to slow down the clearance, which should have been completed since 2012 but putting hundreds of our citizens in grave danger. The areas that saw the Civil War were very economically viable before the civil war, in the production of palm oil, palm kernel and coal for export.

That agricultural yield ceased, since after the war, because the farms, forest, bushes, mines and even homes became contaminated with remnants of dangerous military ordnance that laid unexploded. So, there are man-made hindrances especially some court cases at the Federal High Court Owerri and the ECOWAS Community Court of Justice instituted by those living in the Mined Areas against Government including our two companies. That is not actually our bother. Our bother is with the execution of the various court orders and judgments most especially the second Consent Judgment. That consent judgement is clear in the case of clearance, the destruction of the recovered ordnance at the stockpile and those yet to be cleared. Aside of the first court order which made the Federal Ministry of Justice to conduct a sitting referred to as Locus n Quo the then Solicitor General of the Federation headed that with an inspection of all the bombs, locations where bomb and landmines were cleared including destroyed schools etc. That court order was first to be disobeyed in 2013 by the Ministry. To me as a layman, the meaning of consent is clear, it means “I have agreed”. Interestingly their Government Lawyer is a well known and highly knowledgeable lawyer Chief Femi Falana whose services shouldn’t have been doubted by the Justice Ministry.

Has this administration committed funds for the clearance of the bombs?

I must praise the federal government since governmenance is a continuum. They did in the past but halted the works to enable them source for funds. The first judgment was a court order. It ordered funds be made available for completion and destruction of stockpile, physical inspection of the bombs being evidence of works by government and seeing the victims and survivours. It was obeyed and carried out partially by the same Ministry of Defence, with the involvement of the Ministry of Justice via the court order. That process caused no misunderstanding as no community attempted to cash in like in the consent judgement. But the Presidency was sourcing for funds for Ministry of Defence from the Ministry of Finance, when the life of that administration ended. The fund awarded to us in the consent judgement, formed part of the request of the Ministry of Defence to the Presidency for us to complete the project, provide prosthetics to the enumerated victims and survivours of Landmines and Explosive Remnants of War aside of the funds for winning hearts and mind project resulting from the long delay in the project completion. The current delay is deliberate, I can beat my chest and state clearly that I am sure the Commander in Chief of the Armed Forces and the President of the Federal Republic of Nigeria is, or may not be aware of the request for release of funds for the destruction of large stockpile of over one thousand, six hundred live bombs and munition and the completion of the clearance that is threatening a section of the country and would delay approval as they made us believe. The President, a retired General took active part in the civil war, he knew that areas of land were bombarded, even from the unit he commanded, that makes him know the effectiveness of bombing, talk more of abandoned bombs in their thousands.
He was twice my boss as a Director at the Supply and Transport Corps in the early seventies and my GOC in the early nineties during the skirmishes at the fringes of Lake Chad with the Chad Republic. He is a man, who service to humanity, occupies the better space of his heart. He won’t sit down for six years, four years after a consent judgment was obtained at an international court, looking at danger threatening the lives of his citizens and withhold approval or encouraged the disobedience of that judgement at the detriment of the lives of his citizens, especially when he knows that the United Nation would give partial refund for the amount spent. His government is a government that does not disobey court orders, though ours is yet to be considered by the Attorney General. It’s up to him, also, to allow us enjoy from his milk of kindness.

No, because they have been cleared by us since 2011 on behalf of our principal the Ministry of Defence and the Federal Republic of Nigeria reported completion to the United Nation at the 11th Meeting of States Party in the year 2011. Thus, the clearance of Civil War Landmines was completed officially in 2011 unless, if any omitted mine is found, but definitely not in alarming numbers. Deminers Concept and the Ministry of Defence led by a Director went with a high-powered delegation was at the 11th Meeting of States Party (MSP) where Nigeria declared completion of clearance. You can search the internet and see the result, it’s in the records of the UN. Unfortunately, with the war on terror, Nigeria is yet again to complete its new found residual of landmines and improvised explosive devices planted by either Boko Haram or the Nigerian Military.

The more active devices in the fields of the former war zone are the explosive remnants of the Nigerian civil war. These include, conventional and non-conventional munitions like mortar bombs in the calibres of 60, 81, 82 mm and the 2inch mortar bombs. Others are 106 antitank bombs, 105 mm artillery bomb, Ojukwu buckets steel, air drop and ground launcher types. The Ministry of Defence has earmarked some of the recoveries for the War Museum, so not all will be destroyed.

What is your appeal?

After six years in court and four years after obtaining a consent judgement from the ECOWAS Community Court of Justice I am no longer able to continue to manage the Government’s stockpile without adequate funding or financial assistance from the government, especially for the destruction of those bombs as soon as possible to save the good people of Imo especially the immediate community, our staff, the security operatives from unnecessary deaths or destruction of the community’s property.

While the snail speed processing of the Consent Judgement of 30 October 2017 continues, I appeal for the release of the Judgment Debt, being my complete payment less the discount I was asked to grant since 2018.

We are begging the Honourable Minister of Justice and the Attorney General to provide us with an intervention fund, for stockpile management, to post a senior official of the Ministry of Justice while the processing of the execution of the consent judgement continues. The senior official is to stay with us at the Stockpile in Owerri, to help monitor the status of the bombs and report to him daily, if he is in doubt of our works. He is also to explain our plight to our clients, who troop in daily to embarrass us.

In the event the funds are not ready after four years, the Ministry of Justice should provide us with a storage house at their Ministry to keep the 1,600 bombs and munitions, to enable us vacate the property for it’s owner, whom we owe seven years of rent, when we bring them to Abuja, while the processing of the execution of the consent judgement continues.

Lastly I am ready, despite my poor health resulting from this terrible experience and the insecurity in South East especially Imo State to conduct the Attorney General of the Federation including Journalists of his choice round the Mined Areas, our worksites and the stockpile, so that he will be in the clear picture of the situation and our works and brief Mr President, the true situation, my plight and my sufferings. I shall provide him and his entourage safety wears, but not guarantee of safety from any bomb accident as even myself, as a Stockpile Manager cannot guarantee the life of an over 50 years old unstable bombs.