Posted By: Editoron: July 06, 2022In: UncategorizedTags: No Comments
Print Email

The Nigeria Tobacco Control Alliance (NTCA) has called on NBC and other relevant government agencies charged with enforcing ban on Tobacco Advertising, Promotion and Sponsorship
(TAPS), to ensure that Big Brother Naija does not flout 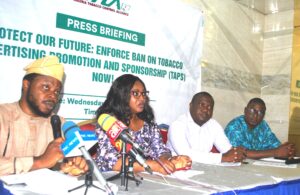 Speaking on Wednesday in Abuja, at a press briefing on the violation of the ban on Tobacco Advertising, Promotion and Sponsorship
(TAPS), Chibuike Nwokorie, Program Officer, NTCA said, “We sound a note of caution to the organizers of BBN and a reminder of their
responsibility towards the Nigerian population – At this time when Nigerians are hungry for quality leadership, a program with such national reach must be used
to portray high standing role models for the Nigerian people.

“At this critical time of our nationhood journey, we cannot afford to have
entertainment for mere entertainment sake, and young and impressionable
Nigerians must not be manipulated into thinking that smoking is good.

“Big Brother Naija (BBN)
8. In 2021, Big Brother Naija, a popular reality TV program, hosted on the GOTV and
DSTV platforms, sparked public outrage when its participants flagrantly smoked on live TV – This depiction of smoking as glamorous challenged the provisions of the NTC Act, 2015 on on-screen smoking, it also threatened the gains made on the ban on TAPS in Nigeria. When it happened, the tobacco control community
called on the National Broadcasting Commission to act immediately.

He said as the programme is about to begin its 7th season, “we are drawing theattention of the NBC to proactively engage the organizers of the show to ensure that there is no repeat of last year’s violations.

“We wish to make it clear that should
there be a reluctance on the part of the regulators or the organizers to ensure a smokefree program, we will explore every available option in the interest of public
health.

“It is important to note that entertainment products set the agenda for many young
people because they are the eyes through which they see the world.

“We call on the NBC to exercise its mandate to ensure that BBN does not flout any
provision of the NTC Act and should any of the provisions be flouted, the
Commission must enforce to full effect such penalties as listed in the law.”