Posted By: Editoron: July 15, 2022In: UncategorizedTags: No Comments
Print Email 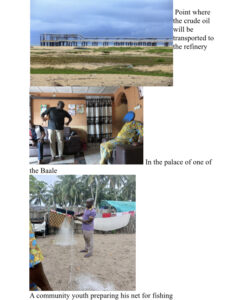 INTRODUCTION
The Centre for Dignity visited several communities bordering the Dangote Refinery in Ibeju – Lekki area of Lagos State on June 12, 2022, following a Save Our Souls on emerging impacts from construction and other activities directly linked with the refinery.
The Centre for Dignity team listened to allegations from the community that during the negotiations with the refinery management to cede their lands to the company they signed agreements that they did not understand, and that there are now subtle attempts to force them off their ancestral lands.

About Dangote Refinery Project
The Dangote refinery is adjudged the biggest in Africa and is expected to produce 650, 000 barrels of crude oil per day on completion. The refinery sits on 6, 180 acres of land and has 4.74 billion litres storage capacity.
Financial analysts say the construction has overshot the initial projection of $12 billion and will instead cost about $19 billion at completion. It is expected to begin production by the fourth quarter of 2022, with 75% of refined products to be moved by sea within Nigeria.

Concerns Grow
For the locals the issue is not how much Nigeria will benefit from the refinery but the fact that when completed, the project will likely displace over 500, 000 residents and force them to leave their livelihoods which is mainly fishing. They also believe the project will pollute their environment just like fossil fuels projects in Nigeria’s Niger Delta pollute the region, citing increasing cases of dead fish and dwindling catch.
During the visit to the community the team met with residents and traditional rulers in five adjoining communities, most of whom were not willing to have their names of print and believe their relationship with the refinery is a David and Goliath arrangement since the company has the backing of the state and federal government.

It was gathered from locals that in the conduct of the statutory Environmental and Social Impact Assessment (ESIA) on the project they were largely novices, and the details were not clear to them. They claimed that influential members of the community who live in Europe and US stood in for them and ensured the details of the agreements are not available for everyone to see.
Most of the community leaders who confided in the team said they would only do so in anonymity for fear of sanctioning by the state government which is only interested in profits over untoward impacts.
According to one of the traditional rulers, “representatives of the state were there when the signing of those agreements took place. So also, were the lawyers and managers of the refinery but the lawyer we had brought from Abuja to represent us was told to leave the room”
He explained that he and several traditional rulers were invited and made to sign documents they did not understand and then they were paid only N1 million for hundreds of acres of land taken away from them.
Another traditional ruler who also did not want his name mentioned, revealed that the overbearing posture of the state government hampered their ability to negotiate with the refinery management since top government officials were interested in personal benefits from the project.

Environmental Impacts
The Centre for Dignity team gathered from the locals that fishing activities are now hampered due to the construction works on the shoreline of the Atlantic where they fish. Added to that, they said they have started observing dead fish on the shorelines, an indication that the refinery operations were already affecting marine life.

Testimonies
Anonymous Baale:  The Dangote refinery management in collaboration with the Lagos state government forcefully took over our lands without our consent. When we had meeting with officials of Dangote company, our lawyer was not allowed to attend. They said it wasn’t time for a lawyer to be involved in the process. At the end of the meeting there was no MOU, or an agreement signed on what the company will do for us. We are usually given bag of rice and a litre of groundnut oil at the end of the year. There is also a stipend of fifty thousand naira monthly given to the Baale of each community and thirty thousand Naira (N30,000) to the youths and thirty thousand naira to women leader in each community. That is all.
We have the poles but have no electricity in our community. We have not had electricity in the last 15 years but there is 24/4 power in the refinery because they are on Independent Power Plant (IPP). Also, our youths are unemployed. Some of the contractors ask for sex from our daughters before considering them for menial jobs.
Abike Adedoye: We are typically fisherfolks in this community. Unfortunately, since the construction work on the refinery started, we have continued to record low fish catch because the fish have swarm to safer waters. Because of this we must go further into the Atlantic Ocean to catch anything. It is getting more dangerous to even do that because our boats cannot withstand the strong wave of the sea.

James Akinsolu: The youth are mobilizing and plan to stage a protest in the refinery with our lawyer, but the Baale’s are asking us not to. We are suspecting that they have been settled. While we feel the need to go on, the influence they wield in the community is so strong that they can make the communities uncomfortable and unsafe for anyone who goes against them, they can get the person arrested because the police patrol here and drive into the communities all the time

OBSERVATION
From the entrance into each of the communities visited, the lack of government presence is noticed. From the poor state of the roads to absence of drainages and the blaring noise of electric generators, nothing gives an inkling that they are hosts to the multimillion-dollar refinery. It was learnt that whenever it rains, the roads are totally impassable due to floods.
On the shoreline, heavy oil infrastructure was observed and a perimeter fence which the community people are forbidden from encroaching upon. It was learnt that this fence and other infrastructure set up to guarantee smooth operation of the refinery has limited access to the sea which the locals rely on for their livelihoods.
Beyond infrastructure, from the conversation the team had with community folks, it could be deduced that there is deep seated anger in the communities and a foreboding that they will ultimately be removed from their ancestral lands. It was also observed that there is a lack of trust for some of the Baale’s who they believe are in cahoots with the refinery management and therefore considered “sell outs”.

Centre for Dignity demands:
• A halt to ongoing construction and other environmentally unsound activities by the Dangote Refinery that violate the rights of the locals to safe and conducive environment to thrive
• The Lagos and Federal government should review the existing MOU between the Dangote Refinery management and the Ibeju-Lekki community to ensure it addresses the genuine concerns of the community
• The Lagos government should ensure the Ibeju-Lekki community is provided basic amenities including electricity, water, and good roads to make life meaningful and enjoyable by the locals. The youths should also be provided meaningful employment
• The Dangote Refinery should be compelled to make public the Environmental and Social Impact Assessment (ESIA) conducted before construction began on the refinery project.
• The Ibeju-Lekki community should by right be allowed to engage the services of human right lawyers in all their dealings with the Dangote refinery.